The following is the second in a series of life lessons where I explore what fueled my resolve, not only to recover but to live a fulfilling life. Enjoy the second installment. You can read the previous entry here.

You’ve heard me talk a lot about resolve. Though I was seventeen at the time I experienced the early signs of it, I didn’t realize until later that’s what was fueling my recovery.

Resolve is a mindset that locks on to rails heading in one direction, and no amount of disruptive input will cause you to jump the tracks. Resolve can help you make that first incremental move beyond point A and, eventually, all the way to point B. You might be wondering what’s behind resolve.

For me, there was plenty of naivete. I thought, “I’ll be back on my feet soon, and everything will be like it was before the fire. Tell me what I need to do to get better.” As the days in bed wore on and the bandages were replaced by a compression mask for two years, I grew up quickly. A more mature understanding of my recovery took the place of the innocent one.

That’s when courage came into play. Courage became the backbone of my resolve.

There are many kinds of courage. When we consider courage, most of us imagine blockbuster movies where a hero saves the day and has a special set of skills to fight off the villains. The more common and hardworking version of courage is the smaller, less grand, but heroic moments that amount to a courageous life.

Friends and family called my decision to lead a fulfilling life courageous. I just wanted to be out in the world and find my happiness. For me, that was choosing a career where I would interact with clients, connect with community members through volunteerism, and take leadership positions where I would have a positive impact on helping others. Everyone who cared about me felt like these choices meant too much face time. They worried about all those possibly uncomfortable interactions.

“Courage is not the absence of fear, but rather the judgment that something else is more important than one’s fear.”

What they didn’t plan on was my willingness to diffuse potential discomfort and break the ice. If bravery means putting others at ease with a quick joke or calling the situation like it is, then maybe I am brave. If that’s the case, then let me encourage you with this idea: Everyone is called upon to have courage in their own lives. Not the movie-hero kind. The everyday, common kind. That is the stuff of great lives.

Perhaps you’re a leader who has to summon the backbone to say what needs to be said no matter how unpopular, or you’re a volunteer who needs to organize something you’ve never done before, or you’ve had a falling out with a friend and you need to extend the first olive branch. Regardless of the situation, test your bravery.

Courage is like a muscle. The more you work the muscle, the better you’ll be at the next challenge. The world needs the smaller moments of bravery that add up to fulfilling lives. I leave you with this thought: Find your strength in what may feel like insignificant moments. I assure you they add up to something very significant. Just ask the people who witness them.

Live beyond your mask, 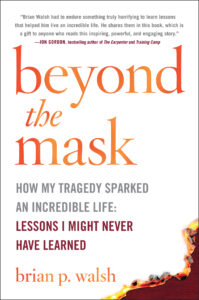 From Beyond the Mask

Life is about having purpose and dignity. There. That’s pretty much it. If you can help one person, then you have a purpose, and by helping them gain dignity, you do, too.

I looked unique so why not live a unique life. Why not be myself?

There can be no success, no real life success, period, without attention to people.

What we understand now is so tiny compared to what we have yet to understand.

If you believe in yourself – your effort, your attention to detail, your integrity, your ultimate goals – then there’s zero risk involved in how you live your life.

Look in the mirror. Know yourself. Be yourself.

You simply can’t win at all costs. It’s a logical impossibility. It’s a statement that eats itself. If you have paid all the costs—damaging relationships, breaking laws, breaking your own ethical code—they you have lost. It doesn’t matter what it says on the scoreboard or your balance sheet.

Life is a gift, not a given.

There is always a cost to avoiding confrontation, especially if the one you’re avoiding is you.

Moments happen, no matter what you think you’re going to do to stop them from happening. But either the moments define you or you define the moments.

You can’t hide. From yourself, sure, sometimes. But usually not from the rest of us. And in the end, not from yourself either.

People see the ‘worst’ of me the moment they lay eyes on me. So why not just be who I am, which is so much better than what they may think I am. Nothing holds me back.

When you look in the mirror, really look. If you’re just glancing, don’t waste your time (or the reflection’s).

When you help someone else, you help yourself in a way that can’t really be equaled by any other activity.

Make a list of all the people who believe in you, with all your many capabilities and talents. Are you number one on the list? If not, then something needs fixing.

If your position is unique, then maybe don’t bother listening to people who think they’re so wise, when their experience of the world is so different.

If you’re not betting on yourself all the time, you’re just gambling.

Believe it or not, for all the variety and choice in the world, there’s always an absolutely right way to do things.

Whenever you do a favor for someone, however big or small, do it all the way—not halfway or three-quarters of the way. Do it in such a way that all they have to do is sit back, enjoy and appreciate the gesture.

Your job in life is to be a ‘foxhole friend’ for as many people as you can.

We all have blind spots. When you’re in a room and you’re looking around for the idiot and you can’t find him, it’s probably you.

Having expectations of your own doesn’t mean you have pressure, it means you have purpose.

I’ve mourned the loss of the 17-year-old Brian but celebrated the new and improved Brian who is stronger and heartier for having gone through what he did.

Live your life the way you want, never mind what anyone else may think, because it’s your life.

There are only two choices before you, at all times: Accept what happened or slowly be ruined by what happened.

Not many people have jarring facts about themselves, right there for everyone to see like I do. But everyone’s got something about which they’re self-conscious. Would a light-hearted comment about it help? Give expression to what you feel others might but don’t want to say.